The Inside Scoop on The Puppy Bowl

We're counting down the days until the BIG GAME this Sunday. Yes, we’re talking about none other than the Puppy Bowl. This is the 15th Annual Puppy Bowl, an event featuring adorable puppies from amazing animal rescue organizations all over the world. The puppy players are cuter than ever and are ready to take the field.

This year there are 93 puppies from 53 different organizations that make up Team Fluff and Team Ruff. We’re here to give you the low down on all things Puppy Bowl. From the starting lineup to viewing events happening all over the country, we have you covered. We’ve even created some special awards and are announcing our winning puppy predictions.

The Details: The Puppy Bowl will take place on February 3 beginning at 3 pm ET on Animal Planet. Pregame coverage begins at 2 pm so clear your schedules! 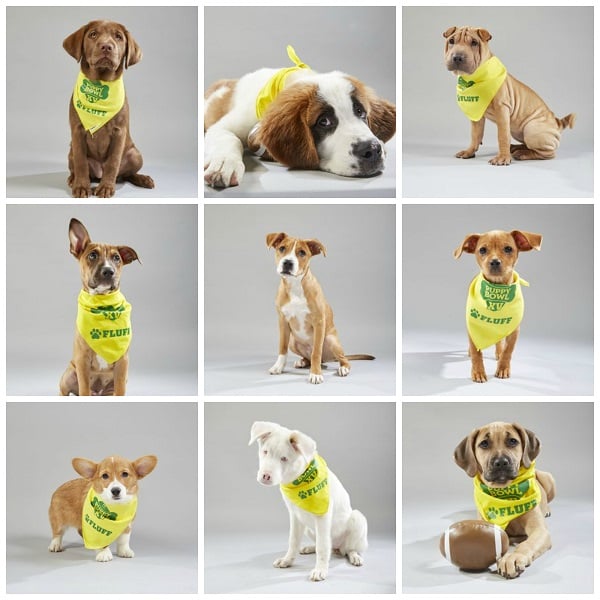 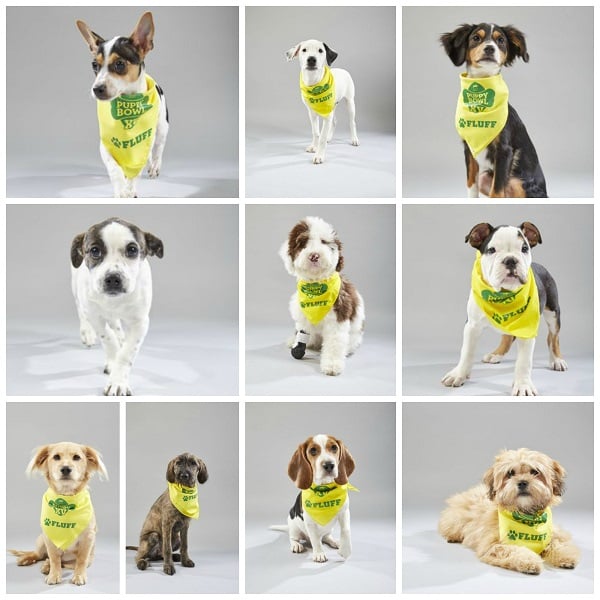 The inside scoop on the puppies’ stories, rescue organizations and tail-gating events:

Virginia Beach SPCA: The Virginia Beach SPCA is an animal shelter that cares for almost 4,000 pets each year. This year, their alumni (adopted this Summer) Ace and Scooter will be representing Team Fluff. They are both Chihuahua-Cocker Spaniel Mixes. For those of you in the Virginia Beach area, they are hosting a Puppy Bowl Tail-Gate party at the Smartmouth Pilot House 2-5pm. 313 23nd street Virginia Beach, Virginia.

Big Fluffy Dogs Rescue: Located in Nashville TN, the Big Fluffy Dog Rescue is dedicated to helping giant mixed breed dogs in need. Their specialty is much like their name, the biggest and fluffiest dogs such as Great Pyrenees, Saint Bernards and Newfoundlands. This year, Alexander the Great Pyrenees, Moses the American Staffordshire Terrier-Chow Chow mix and Whitney the Siberian Husky will be representing BFDR in the Puppy Bowl.

The Sato Project: The Sato Project rescues dogs from the island of Puerto Rico where there is a large homeless dog population. Recent storms have made the situation there even worse. The Sato project has a number of puppies in this year’s event. Bella (also known as Kate) for example was rescued from an animal cruelty case. Harry is Bella’s brother and is also competing in the puppy bowl. Bee, a Chihuahua-Pekingese mix is going to be winning over the crowd at the Puppy Bowl, as will Bugsy the Sato-Greyhound mix. Want to hear an awesome fact? Dan Schachner, the referee for the Puppy Bowl is currently fostering a dog through the Sato project named Rona.

AHeinz57 Pet Rescue & Transport, IA: AHeinz57 is a great organization that has a number of puppies participating in the Puppy Bowl. Brooklyn the Neapolitan Mastiff-American Staffordshire Terrier (yea, she is as cute as she sounds), Gallagher the Saint Bernard puppy and Ziggy the Boston Terrier will be representing Team Full. They are also hosting a Puppy Bowl Watch Party at Doc’s Lounge in Johnston IA with a silent auction, raffle, and lunch!

Double J Dog Ranch, ID: Bumble, a special needs puppy is sure to steal more than a few hearts during this year’s event. Bumble is a Lab-Chow Chow mix and is deaf. Don’t worry though, his hearing issues won’t slow him down one bit on the field. This is the 5th year DJDR has had dogs appear in the Puppy Bowl. They are having an event at Embers by the Lake in Hauser Idaho for anybody local!

Florida Little Dog Rescue: Clara (the adorable Corgi), Lola (the perfectly wrinkly Shar-Pei) and Patti will be participating in the Puppy Bowl this year. What’s even more exciting is that FLDR dog Katie, 16 years young, will be participating in the 2nd Annual Dog Bowl at 8 PM! The Dog Bowl is for our furry friends that are past their puppy years. While Katie is the oldest in the game, the organization says everyone will be amazed by her energy and charisma. We can’t wait to cheer her on!

Citizens for Animal Protection, TX: Dawn, the Beagle-Dachshund puppy will be taking the field by storm on Sunday. Since the Puppy Bowl is pre-recorded, Dawn will actually be at an awesome Puppy Bowl adoption event at the rescue’s location 17555 Katy Fwy Houston TX. They are waiving their adoption fee (thanks for West Houston Subaru) for all pets during the event. Dawn can’t wait to take photos and sign pawtographs with all attendees. They will also be streaming the game from their Education Center during the event.

Planned Pethood, FL: Planned Pethood in Florida will have Emmitt, the Australian Cattle Dog mix representing them this year at the Puppy Bowl. They are located in Zephyrhills Florida.

Helen Woodward: Wait until you see Flo, the Chihuahua-Maltese mix from Helen Woodward. She’s too cute for words and is sure to be a fan favorite this year. Helen Woodward is an amazing organization in Rancho Sante Fe, California. If you’re ever in the area, make sure to visit their 12 acres facility!

Animal Refuge League of Greater Portland ME: Representing the Northeast, Flora the American Staffordshire Terrier will be making her debut in the Puppy Bowl this Sunday. They are also hosting a viewing party at Little Tap House at 3 pm.

Providence Animal Center, PA: Foles, the American Staffordshire Terrier-Akita mix was chosen as part of the starting lineup. He was named after the great Nick Foles from the Philadelphia Eagles. For those of you who were hoping to see Nick Foles in the Super Bowl, you won’t get your chance this year but you can still see Foles the puppy in the Puppy Bowl!

Nevada SPCA: Coming from Las Vegas, George the Chihuahua-Miniature Poodle is part of the starting line up for this Sunday. Bennett, Norma, and Gotti will also be seen running up and down the field. They are hosting a Football Fun adoption event at 4800 W Dewey Dr, Las Vegas NV where past Puppy Bowl players Rufus, Keno, Peanut and Tarzan will be mingling with guests.

Green Dogs Unleashed, PA: Three dogs, Hank, Gabrielle, and Bosley, from Green Dogs Unleashed, were chosen to participate in this year’s Puppy Bowl. Hank the Labradoodle was chosen as part of the starting lineup for Team Ruff. They are hosting a potluck viewing party lunch at Keswick Vineyards in Keswick VA. All you have to do is bring a dish to share, one roll of paper towels, a jar of Clorox wipes or a bag of treats for the rescue.

Jersey Girls Animal Rescue: Maisey is the sweetest Labrador Retriever who earned a spot in the starting lineup. Jersey Girls’ is hosting an event at Green Knoll Grill in Bridgewater NJ featuring a bottomless 2-hour buffet. The cost is $35 for adults, $20 for kids for the buffet, or $10 for kids ordering from the kid’s menu.

Territorio de Zaguates, Costa Rica: This amazing shelter located in Costa Rica is home to 1300 dogs looking for their forever homes. They were founded eight years ago by Lya Battle and Alvaro Saumet. Marisol, the precious Miniature Poodle-Catahoula mix will be part of Team Fluff! Marisol has the most amazing Catahoula markings and a super gorgeous coat.

Humane Society of Memphis & Shelby County: Melody the Maltese-Yorkshire Terrier may be small, but boy is she mighty. We can’t wait to watch her represent Team Fluff this Sunday. She will be hosting a viewing party at Republic on Sanderlin in Memphis this weekend. For $5 you get entry to the event, appetizers, and even a limited edition Melody Puppy Bowl koozie.

Every Dog Counts Rescue, IN: If his name doesn’t win you over his story will. Pistachio the Maltese will be representing Every Dog Counts Rescue in the Puppy Bowl. Pistachio is a Maltese who was born with a congenital defect called a liver shunt. This extra vessel or “shunt” had to be surgically closed off for him to survive. Weighing less than 2 pounds at the time of surgery, it was risky, but he came through it and recovered like a champ! During his recovery from surgery, his foster family fell head-over-heels in love, and they have now adopted him! They are hosting an event at Metazoa Brewing Company in Indianapolis Indiana this Sunday.

Bonnie’s Animal Rescue Kingdom, NJ: This small non-profit organization based in Paramus NJ helps by pulling dogs from one of those poorest country shelters in North Carolina and bringing them up North to find better lives. Remington, the beagle is excited to be playing on Team Fluff!

Paw Works: Scotch the Chihuahua-Shih Tzu mix can’t wait to take the field representing his organization, Paw Works in Thousand Oaks CA. Founded in 2014, the goal of Christina Morgan and Chad Atkins was to help make Ventura County “No Kill.” Less than a month after Paw Works was formed, Ventura County earned “No Kill” status!

SPCALA: Based in Los Angeles, the SPCA LA has been serving Southern California since 1877! In addition to their great adoption services, they also run programs like Cruelty Investigations, Disaster Response Team, Humane Education and a variety of other shelter services. Team Ruff has their pup, Shy Boy on the roster for this Saturday. This Lhasa Apso-Miniature Poodle mix is one to keep your eyes on!

Muddy Paws, NYC: Sierra the American Staffordshire Terrier-Chow Chow mix will represent Team Ruff in the Puppy Bowl. Muddy Paws is based in NYC and holds adoption event every weekend!

Vanderpump Dogs: Nano and Violet were rescued from a high-kill shelter in LA and will be romping around the field this weekend. Violet is a scruffy lovers dream and is said to be a Chihuahua-Miniature Poodle mix.

Doodle Rock Rescue, TX: Last but certainly not least is Will the Old English Sheepdog. He may be a tri-pawed but that doesn’t slow him down one bit! We’re already in love with him and he hasn’t even played a minute of the game yet.

To see a full list of all the dogs including the backups, head over the Animal Planet!

From Team Fluff: Our money is on Gallagher the Saint Bernard because, come on, look at those paws!

From Team Ruff: Sierra has got what it takes to win this coveted award.

Most Likely to Fall Asleep: One of our favorite parts of the Puppy Bowl is when one of the puppies flops down for a nap midway through the game. Our pick for this year’s sleeper is going to Melody.

Defensive K9: Who do we expect will be playing defense of the time? And by playing defense we mean chewing on toys in the corner with no interest in trying to score. This one goes out to none other than Smudge.

Pee-Wee Football: Wondering who is going to have an accident on the field first? We’re guessing Scotchmight be the mischievous pup to take this honor.

How to Help Pets and Pet Parents in the Holiday Season